Tragedy in the kayaking community this morning 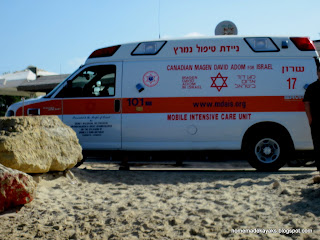 Rough seas this weekend and the club did not go out together. Only private kayaks were on the water this morning, the sea was not too rough and there was a nice wave out at the rock for surfing. While we were having fun in the surf one of our kayaking friends was in dire trouble.
This is what I could piece together from all the different accounts.
Gidi had been out alone as usual, he had been paddling in the bay, Raanan was just going out on his surfski and heard shouting. He looked and saw Gidi had flipped over and was in the water shouting for help.Raanan  jumped into the water to assist, he found Gidi unresponsive, without his life jacket on and adrift. He shouted to attract surfers nearby while holding Gidi and trying to get him ashore. Soon he was assisted by other helping hands who got Gidi onto a SUP board and while they were bringing him ashore began to administer first aid by CPR.
Unfortunately even when the medics arrived and more professional treatment was given it was to no avail and he was pronounced dead after a long and intense attempt at resuscitation on the beach.
I am sure that more details will be forthcoming.
Even though Gidi was not a member of Optimist , we often passed each other on the water and acknowledged each other, as all kayakers do and offer our sincere condolences to his family.
Posted by Unknown at Saturday, April 21, 2012

I am sorry to hear of the loss of your friend and a member of our paddling community. We, here in the states, have recently suffered many such loses; but they were mostly due to inexperienced paddlers, in inadequate boats while being inadequately dressed for cold water.

I wonder if Gadi had a medical incident that caused his trouble. If you learn more, please let us know. Silbs.

The late kayaker's name was Gidi.

Sorry, its been fixed.