And so the summer rush begins 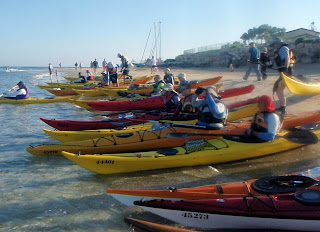 Winter is a great time to kayak in Israel, the beaches are deserted and you feel as though they belong to you.Weeks go by and the only people you see are the few who don't mind the cold water and weather. But as soon as the weather changes, and we almost don't have a spring, it goes from winter on Sunday to summer on Monday, and the beaches get crowded. Tents spring up on weekends and holidays, sit on tops of all types appear , fishermen crowd the shores

and all kinds of sailing boats encroach on our beaches. It makes for an interesting time on the water. 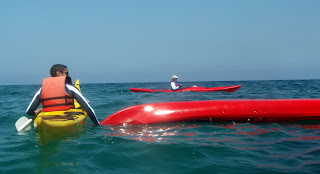 Yesterday was family day, I arranged to take my cousins grown up and married daughters, and son for a kayak experience. We had spoken about it but it wasn't going to happen until I initiated it . So off we went , 5 newcomers to the wonderful world of sea kayaking. After a brief intro and some basic instructions we played around on the water. Its amazing how fast feelings of trepidation, and insecurity change to confidence and happiness as basic skills are acquired and some control over the kayak is gained. At the end of a 2 hour session we were all having a great time on the water and promising to come back again soon. Hope that happens. I love the feeling of taking newcomers and showing them the joy of being on the water.

My old Olympus is beginning to fail on me, water got inside the other day , I guess the search is now on for the next ultimate waterproof camera. Does anyone have any experience with the new Canon powershot D10. Up til now I have wrecked a Sony,[ with a waterproof case] Pentax and an Olympus.
Posted by Unknown at Saturday, May 30, 2009 No comments:

theres always something going on 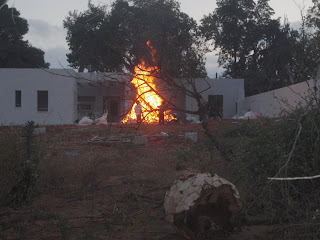 Last week we had bonfire night, actually its called Lag b omer and has to do with counting the days from Passover to Shavout and commemorates the killing of the disciples of Rabbi Akiva. Actually the whole country is littered with bonfires. The kids scour the land collecting any pieces of scrap wood and not so scrap wood that they can find and it all goes up in smoke and flames that night. I'm told it looks fantastic from an airplane. Next day there is a smog over the whole country.

Today a bunch of school kids came to our beach for a Seamanship lesson, actually most of the schools in the area have days like this where they give the kids lessons in kayaks, sit on tops, or windsurfing or sailing. Wish I had had this when I was a kid. See the teacher taking life easy while the kids play in the water. 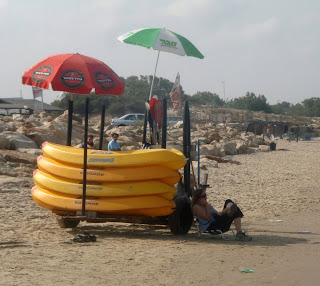 Anat loves her new Tahe Marine Mini Ravel;, it fits like a glove 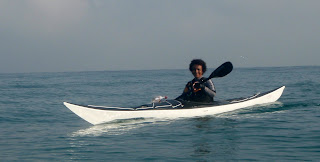 And then we found this dead turtle on the reef.Cause of death unknown but we all felt a tinge of sorrow at the death of such a peaceful creature. 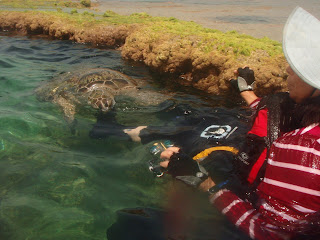 Meanwhile Israel was practicing backwards surfing in the small shore breakers. I like it too, you need good bracing when going backwards and then you need to be ready for the broach and turn all in reverse . So even when it seems as though nothing is happening there is always something going on

chance of a lifetime 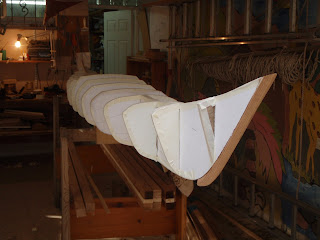 If you ever thought about building your own kayak, but were not able to because of all kind of reasons, then now is your once in a lifetime chance.
We[Itay Bahar and myself, both part time kayak builders and kayakers] are organising a Kayak Building Workshop in Pardess Hanna with world renowned Nick Schade.
Nick of Guillemot Kayaks has agreed tentatively to come and give us a one week workshop for 6 to 12 people .
So if you would like to participate in this event let me know .
At present we are gathering information and deciding on just what we will be doing.Probably we will concentrate on strip built and because one week is not long enough to build a whole kayak we will begin on the deck. Nick believes that we can finish the deck in a week.
I think its an incredible opportunity for all Israeli kayak builders to meet and work with one of the worlds best known kayak designer and builder.
Stay tuned for more info and if you would like to be a part of this experience just drop me a line as soon as possible.
Posted by Unknown at Wednesday, May 13, 2009 9 comments:

The Clinic is closed today, it`s too nice a day to waste on work and so we decided to go kayaking instead.
When I announced to my team at work {Concept, The Home of Dental Health] that I would like to take them all kayaking I could feel the tension rising. Some are afraid of water, some of the sea, some of being seen in a swimming suit and none of them have ever been in a kayak before. Also in the news was an item about an Olympic rower who had capsized and almost drowned before some one came to rescue her. So with much trepidation we met at the Optimist kayak club at 9.30, Israeli time, got ourselves kitted out with skirts, life jackets and paddles, put on our hats and sunscreen and trooped down to the water. Hadas and Yossele were on hand as our personal instructors and after a brief intro we all got into our boats and began to paddle. I`ve been paddling for so long that getting into a kayak is the most natural thing in the world, but for my team it was a brand new experience, and at first I could see the anxiety levels rising. Within minutes the frowns turned to SMILES and everyone began to have the time of their lives.
The sea was perfect for beginners, flat with a mild breeze and not a cloud in sight.
We puttered around, Yossele and Hadas giving instructions and helping with boat control and then went on a short trip towards Caserea, made a beach landing , had a swim and then headed back.By this time arms and shoulders were showing signs of strain, new muscles having been discovered, it was time for phase two.
Off we went for a fabulous lunch in the old city of Caserea.
I'm sure it was a day that my team will remember for a long time, and maybe one or more of them will take up kayaking.
Posted by Unknown at Tuesday, May 12, 2009 4 comments:

I planned to do some work on my new kayak today after the morning paddle, I thought I might also get a move on with the repairs of my old trusty Night Heron . It has been getting some nasty scratches and rubs from rough beach landings and is in need of a good sanding and a new varnish job too. When I got to the beach this morning I found that things were already beginning to change. There was a very small group of paddlers, and the sea was really rough, almost enough to discourage going out. Nevertheless we brave souls headed down to the waters edge for what turned out to be a brilliant days play in the rough water. If you don't like rough water, its probably because of limited skills . As your skill level improves so will your enjoyment level rise. You definitely need a good roll and also good bracing , as well as good boat control especially good edging and stern rudders. On the other hand the only way to get to better skill levels is to go out in challenging conditions, to practice and spend the time in the water. The more you experience the better you get.
Anyway, back to the plan for the day, after some fun in the waves Yoss and Barak decided that a good feast was the best thing to do and so off they went to get some shrimps and mussels. One thing leads to another and so after a great meal of seafood and beer I was in no condition to work on my boats.

That will have to wait for another day.