another saturday morning on the water 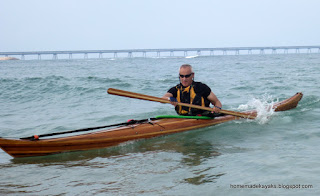 Here are some pictures of a Saturday morning paddle, the first group goes out at 7am, the second at 9.30. Because there are so many new members the first session is usually full, that makes about 20 plus kayaks in the water

.How the sport has grown in the last couple of years. and there are newcomers for lessons almost every day 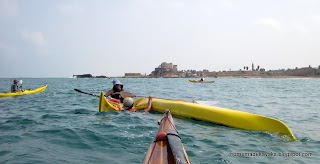 .I really enjoy teaching the rookies  and seeing them improve from outing to outing.its a chance to give back to the sport that has taken over my life. 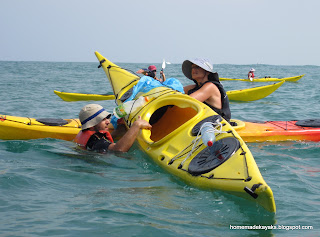 There is always something new to learn and you can never get to the end. 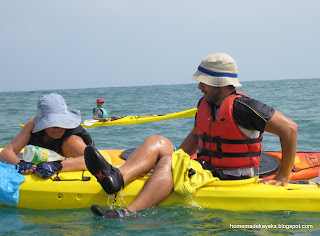 Some get it quicker than others, some have more natural ability, some have more persistence, but in the end almost everybody enjoys the experience and everyone improves . 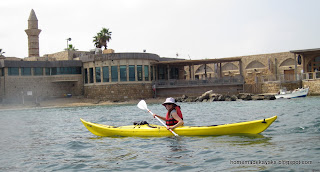 We visited the old port of Cesearea today, 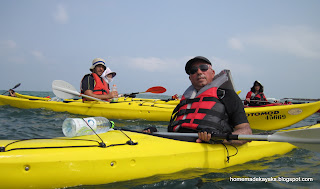 Funny how easily we forget to look around and appreciate our surroundings, imagine paddling round a 2000 year old Roman village, but because we do it all the time we hardly even think about it anymore.

Of course it has been rebuilt and modernised, but there are still lots of relics  left to give it the original flavour. 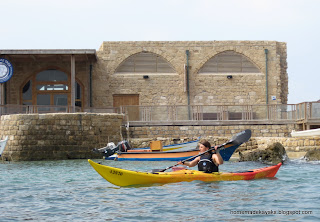 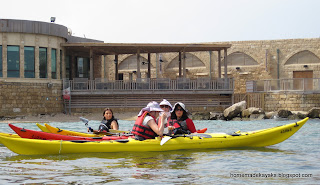 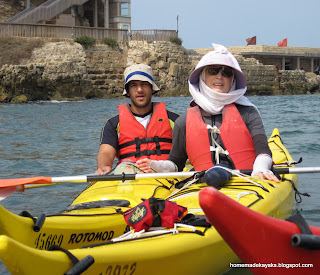 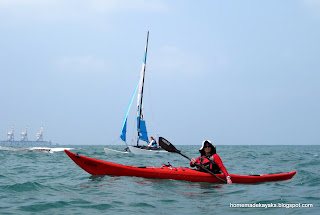 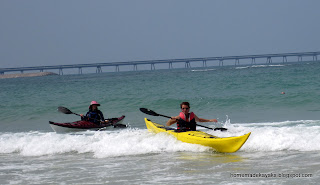 When we got back to our beach we met Hadas with her group of new paddlers out for their first lesson.

We had a visit from a helicopter today, while we were coming back from our outing  we were buzzed by this large chopper. 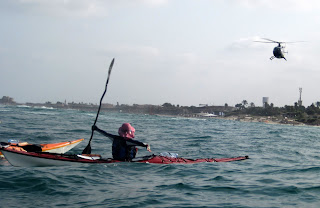 We knew right away that it was Itay flying and Vered was with him, later I learned that Idit was with them too. Pity they flew away before we started playing in the waves, I guess aerial photos of us surfing could be quite exciting... maybe next time. 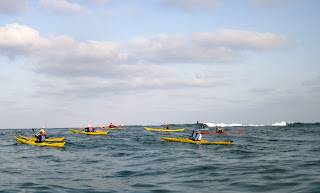 Today we had a new adventure. After going out against the wind and waves coming back home was great fun. 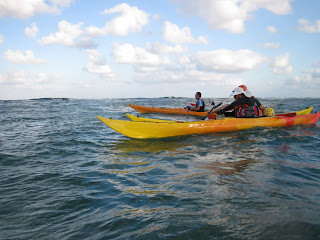 .
After playing in the surf for a while it was  time to head back to the club, and then we found this abandoned old piano on the road. Not being able to resist, Vered put her magic fingers on the keyboard and began to entertain us. 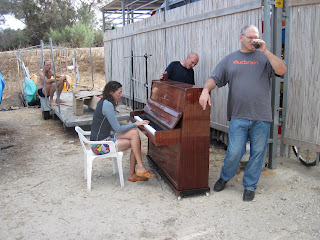 The owner? came and told us we could have it.
So off we went pushing it up the road to the club. It was a bit of a rough ride and the shaking and vibration was not beneficial, but once we got it  there we put it all together again and had our own little show.
Hadas now has a brand new old piano to play with.
Posted by Unknown at Wednesday, July 28, 2010 4 comments:

at last a bit of a wave


At long last  have some interesting water to play in .
Posted by Unknown at Wednesday, July 21, 2010 2 comments:

News flash,
An unknown male aged 57 was found in the sea by swimmers at the Aqueduct beach yesterday, a short while later his kayak was washed up on shore Investigation continues. Swimmers recall seeing a single man going out in a kayak earlier.
Not much to go on so let your imagination take over.
Did he own the kayak, or did he rent it, how much experience did he have?
Rumor has it that it was a sit on top.
Now the conditions here are not too extreme except if the sea is rough, and this is the time for  rough seas, so anyone going out should take precautions.
Can you swim, do you have a life preserver, do you know what to do if you capsize etc etc.
The obvious answer here is no no and  no.
And most importantly don`t go out alone if you don`t have the skill levels to deal with rough water.
Maybe he had a medical problem, asthma attack, heart attack or something like that . 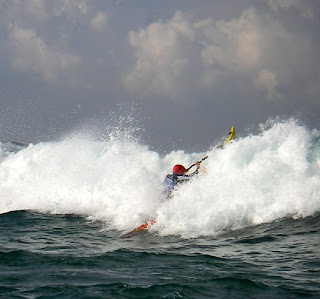 In time we will get the answers but for now  remember to respect the sea and  condolences to the mans family.

face to face with a glacier 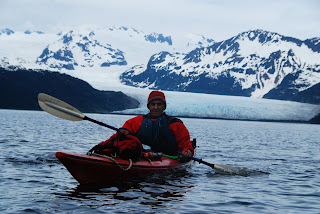 There are a few glaciers in the prince William Sound and we visited some of them. 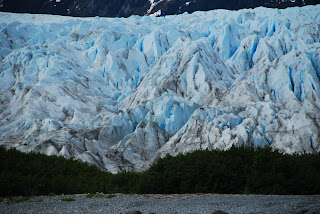 When you look at them from afar, they look like a whitish mass between the mountains, not too impressive and not too big. The distance is deceptive, I guess the clean air also makes things look closer than they are. 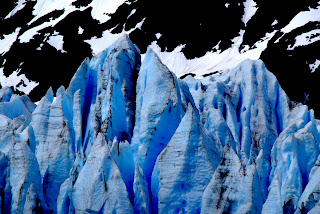 But when you get up close up , the reality changes in an instant. 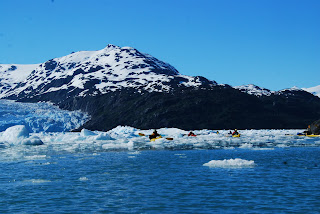 First you have to get through all the ice. As the glacier calves, the ice forms a large white area and sometimes is so tight that you cant get through. We found that one icebreaker in front will allow the rest of the party to follow in his path in single file, but if you wait too long the path quickly closes up and then you have to fight the ice again 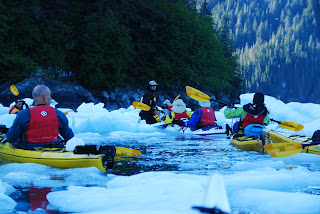 The ice is also a place for seals to lay about on, you can see them just lying around, sometimes they pop up in the water, have a curious look at us in our kayaks and then dive underwater again. 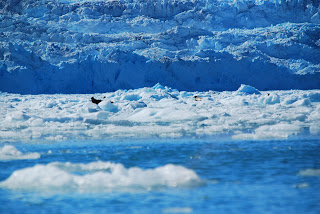 We were lucky to have good weather allowing us to spend a morning in the shadow of the glacier, not like the last trip where it was so cold that they spent a very short time here and then got out as fast as they could . 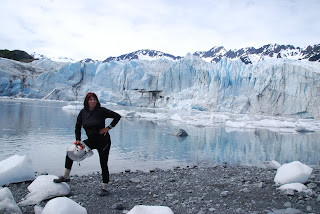 The colors of the ice attests to the age of the ice, blue being one of the oldest. 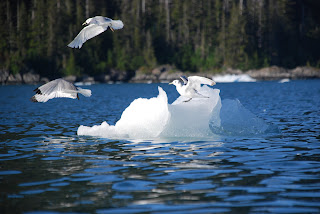 These are some of Racheli`s photos, she had a real camera on the trip, a Nikon D40X with a 200mm lens which she kept in a waterproof box on her foredeck. Luckily the water was flat and calm all the time thus minimising the danger of getting it wet.
Posted by Unknown at Tuesday, July 13, 2010 3 comments:

how to catch a whale

In Anchorage there is a cultural heritage museum dedicated to preserving and showing the original Eskimo way of life. They have live demonstrations of wood carving, dancing , storytelling and a model of Eskimo dwellings with explanations given by native Eskimos. 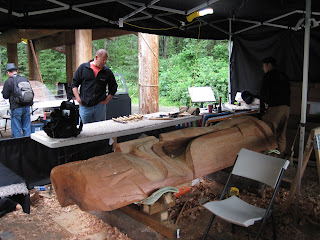 In the museum there are replica kayaks hanging from the ceiling and movies showing the ancient ways. This all makes for a very interesting visit, especially if you are interested in the old ways. 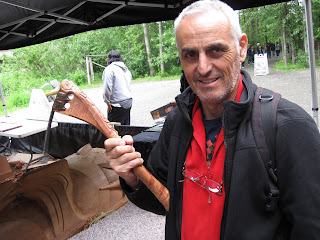 The adze is one of their carving tools, this one is called "the negotiator"

What about whales? this was an important part of the way of life for the Eskimos, a whale provides food , fuel and other useful stuff like baleen  which they can use .
So how can you catch a whale from a kayak or a umiak?, well I can tell you that its not easy to get close to one of these magnificant creatures in a kayak. While we were paddling  we spotted a few whales, but as we tried to get close they just swam away, the best thing to do is to get in their way and let them come to you.
We were told by an authoritive authentic looking gentleman how they did it, and he told us that at age 4 he speared his first whale.
First they use a blanket toss to send up a child high into the sky to spy out the location of the whales, he needs to have 20 20 eyesight and accuracy, as described to us.


About 2 to 300 people are involved in this tossing and I can imagine how high this poor little tyke has to get in order to look for the whales.
When he spots one he relays the info to the hunters who speed out and try to get in the path of the whale. How do you know where the whale is going we asked? " they usually follow the land " he said, so apparently all you do is find one then get ahead of him and when he gets within harpoon distance you spear him with your harpoon. This is designed with a removable toggle on the tip which detaches once inside the whales flesh, the harpoon body is retrieved and the toggle attached to a long sinew cord keeps your catch from getting lost. If the harpoon has been thrown accurately, it penetrates just behind the blowhole and causes bleeding into the lung causing death by drowning in a short while, if not the hunter is in danger of loosing his toggle and all his sinew, which represents years of collecting and working to make the 1000 feet of cord needed to catch a whale.
Sounds like a piece of cake.
Posted by Unknown at Wednesday, July 07, 2010 1 comment:

is there a doctor in the house

Well not exactly a doctor but we did have one dentist, one veterinary surgeon and one medic in the group, so we were well qualified to deal with any medical emergency along the way. 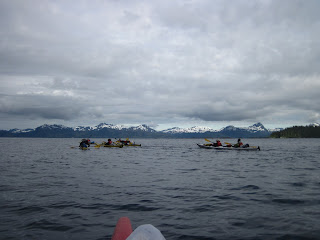 And luckily so, because one day we had just such and emergency.
As you all know , on long kayak journeys, dressed in a dry suite or other cumbersome clothing , stopping to pee along the way is not an easy experience. You cant just jump into the water, hang around a bit while you let go and then scramble back into your kayak.You either have to have some device connected to your plumbing or you need to stop , go ashore  and then do the necessarry.  Well S decided to cut down on her drinking in order to minimise the hassle. Not the vodka mind you, but the water. No one really noticed, until on the second last day while we were on our longest journey. At some stage she began to feel unwell, cold and nauseous. We hooked up a tow line and began to tow, and tried to comfort her but to no avail. She got worse as the time went on. Eventually we had a 3 man tow system  pulling  and as soon as they got to shore Humi took control. 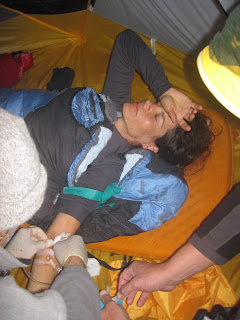 He bundled her up to get her warm, set up a tent and put her in a sleeping bag and another person in the tent to get her warm. After a while when she was not responding he decided to set up an infusion, this because she was vomiting as well. He diagnosed hypothermia and dehydration .In order to improve the hypothermia he wrapped the infusion line with hand warmers so that the fluids entering her body would warm her up too. This seemed to work and after a while she  began to feel better. Luckily this all happened on the last day which was a semi rest day and there was no pressure to get anywhere. 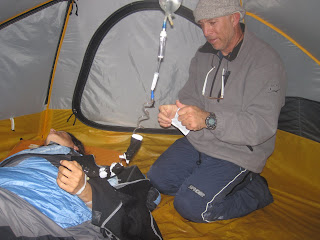 Just goes to show, you never know when you are going to need some medical help and it can happen to anyone at any time, so best to be like the scouts and Be Prepared
Posted by Unknown at Friday, July 02, 2010 2 comments: