how fast do we paddle

Google earth is a good way to measure approximate distances along our shores and gives a good idea of how far we go each time we go out for our morning paddle. Its easy to compute speed when you know the distance. Some of us like to take it easy and just being out there on the water is what counts, but then there are those who use the outings for fitness training and speed becomes an important factor. With that in mind here are a few of our routes and the distances .
1. From launch parallel to the shoreline to the electric co. then west along the pier to the end and diagonally back to our launch ........7km
2.From launch straight to the end of the pier and back.....6.6km
3.From launch to Jasser harbour is 5.5km, then back home total 11km
4. From launch to the Island at Maagan Michael is 7.5km , round trip is 15km
5.From launch to Hof Dor is 14km, and back again makes 28km
6. If we go to Olga its 5.3km one way and on to Netanya makes 16km one way.
So if you are into speed and training now its easy to measure , but remember that the weather conditions and state of the sea also has an effect and needs to be taken into account.
http://mail.google.com/mail/?ui=2&ik=c31acd20cc&attid=0.1&disp=attd&view=att&th=118f13dc961675d1 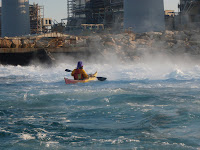 Not Yet fit to paddle

The best advice I received from a friend about my recent new hip was" Dont screw it up". So even though I feel great, a bit limited in the leg department, and lacking some muscle power, the urge to get up and go is very strong and I have to fight it at every turn. I guess I have to learn patience. I have been doing a bit of work on the kayak, cut out the cockpit recess, [Hadas wants a larger cockpit for easier entry], and am now filling it in before cutting out the actual cockpit. Also Hadas has been very busy getting the English version of our website finished with Derrick and the end result is fantastic. I have been doing some editing and improving the English too , not yet finished but getting there . Its worth a visit so go here http://optimist.accountsupport.com/
See you on the water soon.

the rest of the video from rami


Here are some more clips from the video that Rami Tsadok made, there was so much that the original was too long and I had to make 2 shorter videos.
Posted by Unknown at Saturday, March 15, 2008 1 comment:

Here is a short video made up of clips taken by Rami Tzadok over the space of a few days at our beach at Sdot Yam. Sometimes the sea was nice and wild, some days a little calmer but generally you can get a nice feel for the waves and the fun we were having.
Enjoy

Sunday they sent me home, and not a moment too soon. I had had enough of the hospital and felt good enough to go home. No pain, mobile enough on my crutches and well enough to manage on my own at home. It`s nice to have a constant stream of visitors, makes me feel as though I have not missed or am not missing anything going on at the Kayak club [except the actual paddling], but I can watch them go out and come back on the webcam. Also I can get on with kayakbuilding, albeit only when my wife is out of the house.I have a feeling that I will be back to normal sooner than predicted. Today I had a physiotherapy session and so at least have some structured exercises to concentrate on.

The advantages of the hospital gown

Everyone knows the gown, it`s like a long shirt put on backwards, tied with a couple of tags and mostly flapping open to air your rear.The first time you put it on you feel totally vulnerable, your VIP status disappears and you become just another body in the hospital. But as time goes by you begin to see the advantages of the design. It`s very airy, allowing a cool breeze to caress all parts of your body.It makes a trip to the loo a piece of cake, no zips or buttons to tangle your fingers and the speed with which you get to do what you have to do is greatly improved. If you can overcome your self consiousness and begin to not give a damn, the thing can become quite a good experience, pity that I have to go back to trousers again so soon, I was just beginning to enjoy the freedom that it gives.
I am back home after having a total hip procedure done, it went like a dream , the op was on Thursday morning, and now Sunday I am back home , walking around on crutches and beginning the recovery phase.No pain at all and thrilled to be over the experience so soon. A huge thank you to all who sent me good wishes, messages of support and visited me in hospital.
Hope to see you all back on the water soon, and if you wonder why i`m wearing a dress, just think comfort.
Sorry, no hospital photos.
Posted by Unknown at Sunday, March 09, 2008 4 comments:

and now for something completely different

Ok so now I have hung up my kayak and packed away my kit and am on my way to hospital for a week or so. Who knows when I will be able to get back on the water, I hope its sooner than later.
Today was my last outing, good weather and playing in the small waves on the shore then a breakfast at the club and thats it for now. So goodbye to all and hopefully see you soon.
Posted by Unknown at Wednesday, March 05, 2008 1 comment:

On Monday the sea was too wild for any sane kayakers to go out. The regular paddle was cancelled but one brave/foolish soul decided that he would give it a try anyway. This is what he told me . The sea was wild, out beyond the reef there were huge waves the likes of which he had never seen before. They were breaking out at sea, not just big swells. At this stage he decided that Ehud was right and he turned to go home. This was not a friendly sea to be out in in a kayak. As he passed the reef again the wild sea capsized him and when he tried to roll his paddle broke. Not having a spare paddle he opted to bail out of his kayak. Holding on to both halves of his paddle and trying to hold onto the kayak too was just too much as the sea was throwing him and the kayak all over the place and he was afraid of getting hurt.So he abandoned the kayak in the hope that it would get washed to shore and started swimming ashore. The currents were not too friendly and it took him about 40 minutes to reach safety. In the meantime Ehud and Rami had been watching his adventures and sent a kite surfer out to help bring him in.
So what lessons are to be learnd here.
First of all dont overestimate your ability.
Second , never take the sea for granted, it will always be stronger than you.
Next , what is your bail out plan and what are your levels of defence.
According to John Lull in his book Seakayaking Safety and rescue, the four levels of defense are as follows:
Level 1 Judgment and experience
knowledge and experience
seamanship
boat control
balance and edge control
Level 2. Recovery Skills
Brace strokes for capsize prevention
Eskimo roll, capsize recovery
Level 3 Rescues
Assisted rescues
Self Rescues
Level 4 Outside Assistance
Flares , radio etc
So if we analyse this incident level 1 skills were inadequate and a bad decision was made.
level 2 skills did not succeed
level 3 skills were non existent as there was no one for assisted rescue and no spare paddle for self rescue
Level 4 . there was no way to signal for help but luckily Ehud and Rami were on the lookout and sent help.
Lets hope some of these lessons are learned and taken seriously, remember seakayaking can be dangerous to your health in certain conditions.
That said today was a great day in the waves and whoever was out there had the time of their lives. Just ask Limor and Omri. And maybe we will get to see Rami`s video too.

always look on the bright side of life

Next week I am going to hospital to have a total hip replacement done on my left hip. I had hip resurfacing done about 5 years ago with the hope that it would last for 5 to 15 years. Unfortunately it only lasted 5. Now I have been hobbling around on crutches for a couple of months waiting for my surgical date.So whats the upside of all this, where is the bright side of life here.
Well for starters people have become very nice to me, holding doors open, allowing me to go in first, and in general being very considerate. Secondly I got Michal my daughter to mow the lawn, maybe this will continue and become a new routine. Lynn routinely takes care of all the home maintainance that needs doing leaving me free to hobble around and build kayaks and go paddling.
What more can an addicted kayaker want. I guess all this will change when my hip is better and I am mobile again.
In the meantime I have managed to complete the stripping of the deck of the Greenland Night Heron. Up to now I have put in about 60 hours of work and will take a break till after I recover.
I have updated the photo diary and you can see it here.........
http://picasaweb.google.com/nseligster/ProgressReportForTheGreenlandNightHeron.
Today Eyal was lucky again catching 3 fish, or is he getting to be a better fisherman? I have noticed that the better you get at something the more luck you seem to have.