The Jewish New Year starts tonight, so I will take this opertunity to wish everybody
A VERY HAPPY NEW YEAR,LOTS OF LOVE AND GOOD HEALTH AND MAY YOUR GOOD WISHES ALL COME TRUE. And for all the kayakers out there in the wide world, many happy days of safe paddling.
Steve
Posted by Unknown at Monday, September 29, 2008 3 comments: 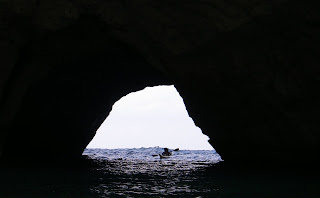 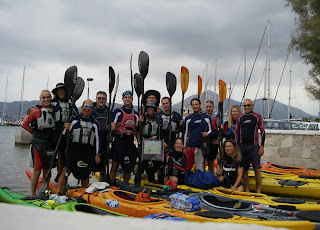 And now all that is left are memories and photos of a FANTASTIC week spent kayaking and camping on the Greek Island of Milos. 14 members of the Optimist Kayak Club flew to Milos, rented kayaks and spent the next 5 days in seakayak heaven. Day one , left Adamas, the main city on the Island and headed out of the bay. The weather looked unfriendly and by evening it was cold, windy and raining. The seas were choppy but the wind was behind us , so paddling was not a problem. Who would believe that there could be cold and rain on the Greek Islands. In my mind I had a picture of sunny skies, clear blue water and long white beaches, and reluctantly had packed a few winter clothes, just in case.Reality sets in real fast when you have to survive in the elements. We landed on a windswept beach and were debating what to do for the night.The options looked bleak and we were resigned to a long cold wet night, when as from heaven, an angel appeared with his 4 wheel drive van and after a hurried debate he began to transport us up to the monastery close by. By luck, or as some would say, in answer to a prayer, we had landed close to the monastery where a huge party had been planned for the night. They were expecting over 2000 people, had live music and tons of food and drink. 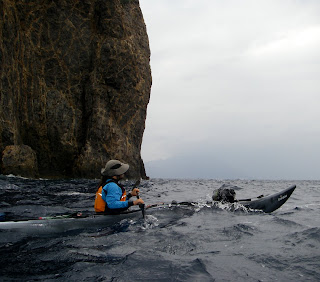 Due to the inclement weather, flooding roads and inaccesibility of the place we were the main guests, together with a handful of locals who had arrived earlier.We were given a room, and once we were dry and warm began to appreciate our good fortune. The music, food and warm atmosphere together with the local Ouzo and beer made for an unforgetable night. When we offered to pay for our lodging and transport, the response was "no money". 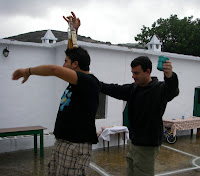 So we left a modest donation for the monastry and went on our merry way.
More about the trip later, meanwhile I have uploaded all my photos in a web album
http://picasaweb.google.com/nseligster/OptimistsInMilos?authkey=52DAxPJGCC0#
Posted by Unknown at Friday, September 26, 2008 1 comment:

We arrived home this morning after a week of seakayaking round the Greek Island of Milos, here are some of the first photos, there will be more to follow once I get down to editing them. This is just a teaser to get those juices flowing. Milos is a seakayaking fantasy land with majestic cliffs, hundreds of sea caves and incredible seascapes.More later

Posted by Unknown at Friday, September 26, 2008 No comments:

On Friday morning we are going to the Greek Island of Milos for a week of kayaking and camping.
I for one am passed being ready for a vacation having worked all summer while the rest of the country was on vacation. So I am really looking forward to this break. From what I have heard by people who have been there it is a fantastic place, incredible scenery and great food. We will be renting equipment from a local kayak club and then we are on our own. We return on Friday 26 Sept , so until then this space will be dormant.
See you soon
Steve
Yesterday while helping Hadar with her rolling lesson, I suddenly saw Yossele standing up in his kayak and then Hadas doing it too. I was a bit far away to get a good pic but heres the best I could do at such short notice, and Avital was showing off her new roll after quite a long time of learning. good for you Avital.

Posted by Unknown at Monday, September 15, 2008 No comments: 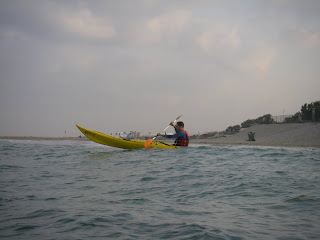 Much to my surprise I received a super fast reply from Olympus Cameras to my open letter. I was surprised because they had acknowledged getting my letter but had warned me that a reply may take a while as they dont reply to letters on New years day, national holidays and Olympus holidays either. So heres what they said
Dear Dr. Gordon, Thank you for your e-mail concerning Olympus waterproof digital camera. Your disappointment is entirely understandable if both of your cameras were damaged due to water. However, cause of the damage depends on how you use the camera. Therefore, we are unable to give you any definite comments on the problem of your cameras. While appreciating your kind offer, you do not have to test our camera since waterproof test is conducted based on our proven methods at our end. Thank you for your proposal and your understanding. Thank you. Best regards, M. Higa Customer Support Center OLYMPUS IMAGING CORP. Tokyo, Japan
I wonder just how you are supposed to use a camera designed for water and underwater in order for them to stand by their product?
Well I have just bought the Pentax optio w30, its last years model but the price is reasonable and the camera has a good reputation, and now I regard all these camerss as disposable and not worth spending too much money on. And the pictures are great.
Posted by Unknown at Wednesday, September 10, 2008 1 comment:

There must be something in the air these days thats making everyone learn to roll a kayak. And not just your everyday run of the mill old Eskimo roll, now you see them out there doing hand rolls, stick rolls, and one of them even tried to roll with a huge rock in his hand. Needless to say he didnt manage on the first try and then he couldnt retrieve the rock without exiting his kayak. I suppose its just a matter of time until the rock roll becomes the norm. Yesterday afternoon I went back to the sea with Eli and lo and behold, he managed a hand roll for the first time.
What a nice way to end the day

Here are a few pictures from today`s outing using the Picasa 3 movie maker.
Its easy to use but does not have all the features of MS movie maker.Yesterday I used the collage function, its ok but I don`t think it replaces a slide show.
I was using my camera with the internal memory as my card got ruined by water leaking so no videos today, only a few stills, and the quality is on the lowest resolution. I have come to the conclusion that these small waterproof cameras should be thought of as disposable, its just a matter of time before they begin to leak.

Posted by Unknown at Saturday, September 06, 2008 No comments: 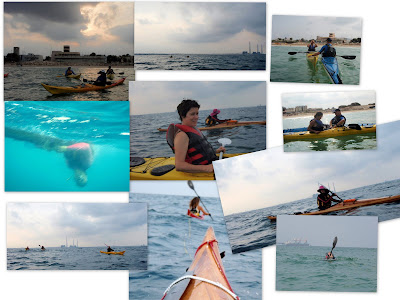 Open letter to the president of Olympus Cameras.
Dear President,
I am writing to let you know of my dissapointment with your so called waterproof cameras.
I bought my first Olympus Mu 760 about 8 or 9 months ago , with the full confidence that it would be the answer to my prayers for photography while seakayaking. At first I was satisfied, and the camera performed very well, but unfortunately after 2 months it began to malfunction and then stopped working altogether. The waterproof seals had not prevented moisture getting inside and corroding the electronic bits. The camera was replaced after a long wrangle with the supplier, and the new one was great in the beginning too. Yesterday while filming on the water the camera stopped working and when I got onto dry land and opened up the battery chamber I found it was wet and there was water all over. the card was ruined and non repairable. I dried out the innards with a hairdryer and so far the camera works but now I have to get a new card and have lost all confidence in the waterproof capacity of the camera.
I would like to offer my services as a tester for all your new waterproof products as it seems as though your current products do not stand up to wet conditions in a reliable way.
Please send any cameras that you would like to test to me and in a few short months I will let you know just how good or bad they are.
Yours faithfully
Steve Gordon
Seakayaker with a camera

For all those learning to roll you should read Derricks article on rolling here.He gives you the essence of a roll and a different way to think about rolling.
For all those addicted optimists, please be patient and give me a little time, getting the videos ready is not like instant coffee, and I also have to go to work sometimes.
Nevertheless heres the latest.