how to watch a volcano

The Eolian islands are of volcanic origin, Vulcano and Stromboli are the only active ones in the archipelago, and you can see the fumes coming out of vents in the rock on Vulcano.These are called fumaroles.
Stromboli has 2 towns, one on the southern point called Ginostra, where we spent one night, and the northern town Stromboli where we spent the second and last night before leaving.
From Ginostra you can take a walk along the mountainside to a place called Punta Dei Corvi, its about a 30 minute walk at night and you definitly need a local guide.
﻿﻿ ﻿﻿
From here you can see the flames spurting out of the main crater about 3km away. For us this was a good introduction into volcano watching. It came after a fantastic meal and lots of drinking, then this slog up the mountain in the dark. The view was a little dissapointing as we had expected a more spectacular sight.
Next morning we paddled from the port of Ginostra round the western side of the island and had our second view of the volcano. 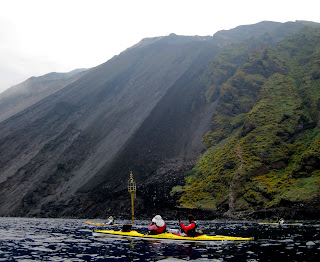 In the day all you see are huge plumes of black smoke belching out of the mountain top, 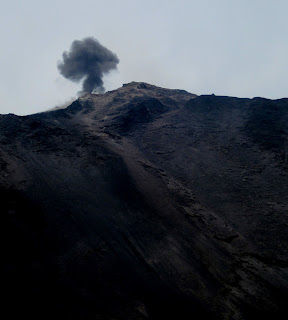 then you see rocks bouncing down the slope and splashing into the ocean. We spent about an hour sitting in our boats watching the rocks coming down. I`m sure it must be a fantastic sight at night and if I had known this would have taken a night trip to watch 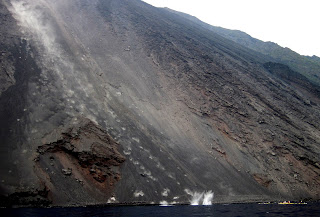 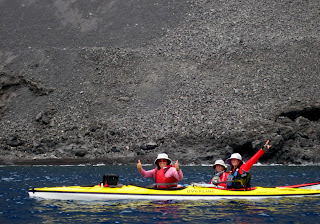 The third and best way to watch the volcano is to climb the 900m to the top and look down on the firey crater spewing rocks and flames out into the night sky.This is by far the most impressive and well worth the 2 1/2 hour climb.
Heres how we did it

fantastic, i cant believe i was there.
breathtaking it was :-)

Beautiful pictures Steve, you just captured the spirit of Stromboli!

Appreciate all your comments guys, thanks.