look what they did when I wasnt there 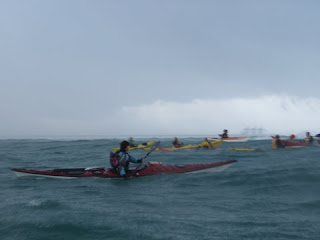 This morning I had to miss the 7am outing, but planned to go out a bit later. I arrived at the beach at around 8 and went to have a look at the sea. 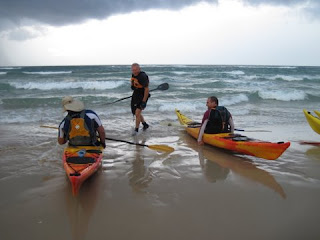 Ehud told me that the group was coming back as the sea had risen and they decided to shorten the outing. 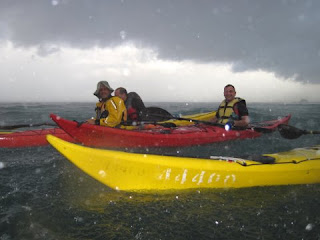 I went to watch and saw the kayaks coming in. In rough weather there is a safe passage through the reef where the waves don`t break and we usually come back through this gap. From my vantage point I saw Hadas signing the way and the group begin to land. Then I saw one kayak capsize, but didn`t take much notice because it happens to newcomers quite a bit, and if they are past the reef they usually get rescued or washed to shore.So I went back to the club and found Ehud on the phone to Rami. Now Rami lives on the frontline of the beach and has a great view of the sea. He was watching and told Ehud that there were a few in the water including Hadas.
It sounded out of the usual and so I got changed and ran down to the water with my kayak thinking that I may go our and help with the rescues if needed.


By the time I got there they had all beached and were discussing what had gone wrong. 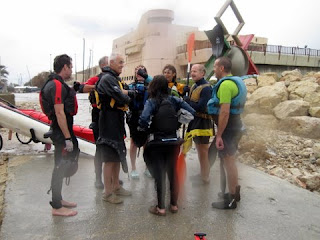 One of the kayaks capsized and was rescued, but another in a homemadekayak also capsized and because his kayak doesn`t have bulkheads it flooded and was impossible to right. He was being swept into the rocks and 3 others tried to rescue him. Hadas had given her towrope someone else and none of the other rescuers had one. Not good. A huge wave then lifted them all up and threw them onto the reef causing various injuries to kayaks and kayakers. 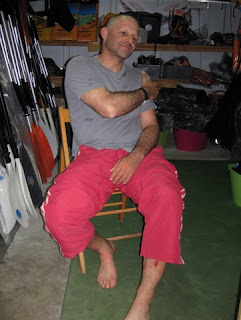 All are ok now and one kayak has minor damage to its prow.
Lessons have been learnt and advice given, and the next outing will be a lot safer.
We all went back to the clubhouse to celebrate Zohars birthday with cake and alcohol and then I went out to play in the surf.
Posted by Unknown at Friday, November 13, 2009

Sounds like they were lucky that worse didn't happen. I don't have to tell you that a kayak without bulkheads is not a sea kayak (did he at least have flotation?).
And doesn't it seem like we always have the right equipment except for that rare event when we don't have the one little piece that is urgently needed? That's why, even when I go for a paddle on a quiet river, I always have short and long tow lines, spare paddle etc. I never know which I will need or when. Sorry, didn't mean to preach.

dead right you are, its always just like that.

i forgot to mention that todays pictures are all by Vered with her Canon. thanks Vered

My Tweet after this event:
That was our Friday 13th paddling - http://bit.ly/6U5tX - somehow when you are rescuing you are in a hype the all day after.