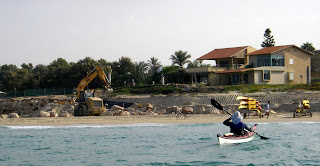 Every year the beach is rearranged by the Kibbutz members [who exactly decided this is a mystery] They bring in bulldozers and tractors and move the sand around , I suppose its to prevent the small cliff from being washed away and endangering their houses, and every winter the sea reclaims the beach during the winter storms. Now I see they are building a huge stone wall or rockery to help them this time. Lets see how mother nature responds. Watch this space during and after the winter .

Hadas has just returned from a symposium in the USA, lnote the relaxed posture when assisting in a rescue.

Hats off to Arele , almost every week he brings a new friend to the kayak world amd gets them off to a good start. The younger the better, I guess its easier to teach youngsters , they seem to pick up the techniques easier than us old folks, at least in the beginning. 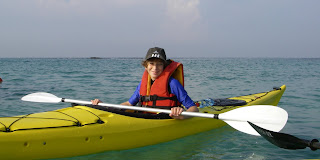 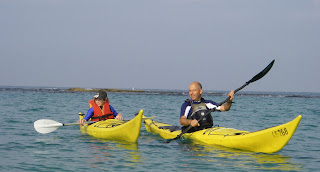