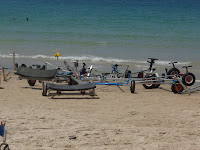 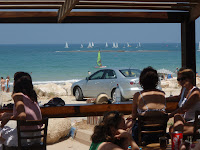 There was a time not so long ago when we were the only people on the beach, now it`s getting crowded. Our beach is a watersport beach, officially not for swimming and there is no lifeguard on duty, but it`s a magnet for catamarans, sailboats, windsurfers and kayakers.The best time is early morning, its not too hot yet and still not too crowded, but come a bit later and it gets very busy with almost no place to park a trolly.Looks like it`s going to be a hot busy summer.
Today I did the end pour of epoxy in the stern of the kayak, this mass of epoxy strengthens the end and allows a hole to be drilled for a carry handle, when its set I have to flip over and do the same in the bow end. there is light at the end of the tunnel, now I have to begin thinking of my next project............. anyone want a new kayak??
http://picasaweb.google.com/nseligster/ProgressReportForTheGreenlandNightHeron

I was wondering if you put the end in a bucket of water to cool it when you do the pour. I remember how much heat was produced when I did the same on my Pygmy Arctic Tern.

This time I didn`t use a water bath as a heat sink and it turned out ok, I guess I didn`t use enough epoxy to generate heat