So there we were, Zohar and myself in seakayaks and Israel in a short surf kayak, braving the stormy seas and strong winds. 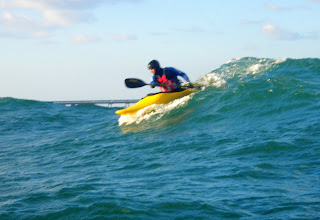 As we played in the surf we were drifting southwards due to the strong northerly wind.
We ended up opposite the events hall at Nofshonit beach. I had already bailed out once, got tumbled by a strong wave, had my spray skirt ripped open and didn`t manage to keep myself in the kayak in the wave. I think my thigh braces are too slippery and dont have enough support to hold on to in these conditions. This is the second time that its happened, so I guess I will have to modify the braces and add some extra support and make the surface a little more abrasive for good grip. 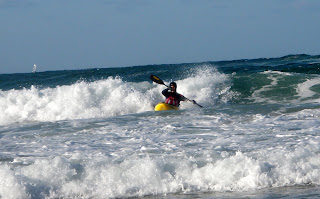 Zohar managed to get a good ride or two in the waves but no photos as I was swimming to shore at the time. She also had to bail and swim to shore a couple of times . Luckily for her she managed to hitch a ride with Itay and Yochai back to the club 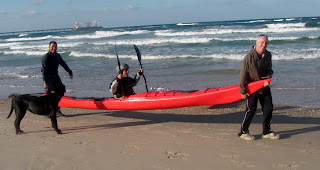 while I had to fight my way back against a 20kn wind. All in all a great day on the water.
Posted by Unknown at Wednesday, November 18, 2009