it can happen to you too 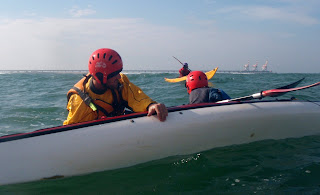 On saturday they registered for the symposium, they decided it was about time to learn some rescue techniques and get some experience under their belts in incident managment. On the Friday before, they were still confident in their belief that they could manage on their own, as up till then all had been fine. They usually paddle together, often not with the group, and usually not in wild seas, so they had no reason to worry . It has been a long time since any of them capsised, and so they havent had any rescue practice, until Friday,[ not even the 13th.]
As they were going south, Y noticed that they were too close to shore and there were still some largish swell coming in. 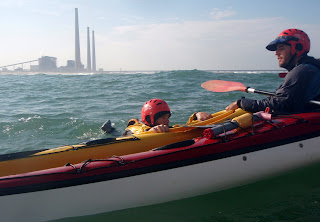 Before he could alert S to the potential danger a large wave came in, Y managed to crest the wave but it caught S and flipped him over. He bailed out and while Y was doing a rescue he also flipped over. Now we have 2 kayakers in the water in the shorebreakers along the reef.Luckily they managed to get to shore, empty their boats and carry merrily on their way.
Being intelligent souls that they are, they began to analyse what had happened and find out just what went wrong and what needs to be done so that it won`t happen again.

I heard the tale on Saturday morning and recommended that they both sign up immediately for a course on incident management with Jeff Allen.
As luck would have it Jeff will be here on Thursday for a 4 day symposium and his area of expertise will be just what they need.
I`m sure everyone who reads this will have something to say, some invaluable piece of advice, or critisism. And they will all be right.
The thing is that even in our benign conditions, warm water, lack of current and tides, ease of getting back to shore mostly, one should not become complacent. Incidents happen all the time, the more you practice, the more you think about them and the more skill you have, the easier it is to deal with them.
So, heres another reason to come to our symposium.
By the way, Y told me he was going to write the story in our forum, but till now I havent seen it and hope he doesnt mind my telling it here.
Ps, as I wasn`t in the neighbourhood I had to use archive photos for illustration only.
Posted by Unknown at Sunday, October 25, 2009

I confess: I got trashed yesterday in very similar conditions while helping with an instructor update. Our group, however, is well schooled and practiced in rescues and things happened quickly and efficiently.

Note to self: Watch the waves while adjusting your gloves.

it can happen to the best of us at any time too.....heres proof